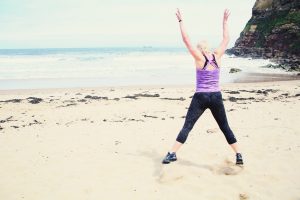 I couldn’t have imagined jumping on a beach for photos for my website! I was managing a transactional HR Shared Service in the NHS, but more excitingly I was about to start my practical training as a Gym Instructor. I’d been studying at home for the previous few months, but the reality of what I was doing was about to kick in……..I was going to a strange place (Leicester!), to do a strange thing and to meet strange people (would they all be much younger than me, would that matter?).

A – To prove to myself I could

This was my second attempt too, I’d headed off to Glasgow late one Friday night a month earlier, arrived at the training venue the next morning, only to find it had been cancelled and they’d forgotten to tell me. That’s a whole other story but I will just mention that it was an interesting experience trying to get a train home, the same day Scotland were playing at Kingston Park in the Rugby World Cup!

Thankfully the trip to Leicester was more successful. I met some great people and learned a lot, not just about exercise but about myself and what pushed my buttons. I hadn’t stepped so far out of my comfort zone for a long time.

I’ll never do anything with it

When I started on the journey it was to see if I could do it. Lots of people told me I could, which was great, most of them also said that once I qualified I would want to put it to use. Now, put yourself in pantomime mode ….’Oh no I won’t’…..’Oh yes you will’……I’ll say no more because the rest, as they say, is history.

Well, very recent history. The restructuring of the Shared Service lead me to take my redundancy and take the leap into a different, exciting and terrifying world. People told me I was really brave, was I?

I talked to a few great people at the start who shared their experiences and knowledge with me, they gave great advice, tips and suggestions. One of those suggestions was to write a letter to myself to open after my first year, describing what success would look like, I loved that idea….I didn’t do it. I didn’t do it because I didn’t know. How would I know?  How would I decide how many clients I needed to be ‘successful’? Or should it be how many classes I  run, or how much money I earn?…….I didn’t know so I didn’t do it. I’d instantly got caught in a trap of forgetting what my focus was but I didn’t realise it.

Then last week something happened. A lovely woman who comes to one of my classes (who wasn’t at all keen on the idea of exercise but, because of early arthritis, needed to do something to improve her strength and mobility) stayed back at the end of class to tell me how her daily movement patterns had improved and what she could now do that she struggled to do previously………that’s when I realised what success was……that’s when I was reminded why I wanted to do this.

Trust me but I’m not a doctor

It wasn’t that I’d pulled off some minor medical miracle, it wasn’t even the fact her mobility had improved (but I am absolutely thrilled for her), it was the fact that she trusted me enough to come along and try and was now proving to herself what she could do. It wasn’t me making her able, I was just supporting the process of her believing in herself and seeing what she was capable of.

My passion in exercise, which you’ll already know if you’ve read any of my other blogs, is about longer term health, not aesthetics. I chose to train to be a personal trainer because I want to enable those people who want to be fitter but maybe don’t know where to start, or need some assistance, to focus on what they can do, not what they can’t; to start to feel the benefits of being more active. I want people to see that you don’t have to already be fit to go to an exercise class, you just need to take that first, often most difficult, step through the door.

I’ve realised I love coaching group exercise, I love the moment when you see the initial fear turn to determination when people realise they are doing it, I want more people to feel that. I’ve loved seeing the same progress with personal training clients, watching their commitment grow once they get started.

It might be six months later than intended but I think I can write that letter now.